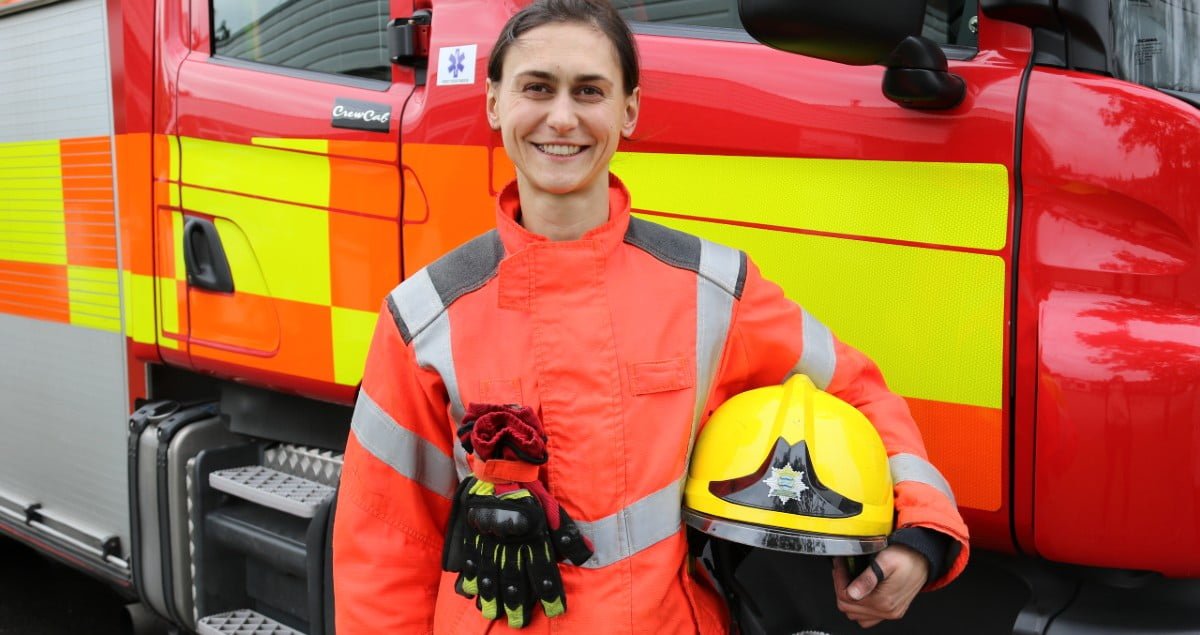 This is through supporting recruitment campaigns; a free members Jobs Board; speaking at Fire Service Equality, Diversity and Inclusion events; providing training and development; and growing a network of local and regional reps who act as WFS ambassadors in their services, inspiring other women to be their best.

In 2021, the gender imbalance in the Fire and Rescue Service is still high.

WFS Vice-Chair, Caroline Anderson, is convinced that the more women are supported in the fire service and are visible as role models, the more likely girls and women will see it as a career path too. Firefighting is often still seen as a ‘man’s job’, and many girls hold back from exploring careers in the fire service. There’s also much more work to be done across the sector to encourage other underrepresented groups to consider the fire service as a career.

Only 5.1 per cent of all FRS staff are from ethnic minority communities, and experimental figures show just 3.3 percent identify as LGBTIQA+.

A vital part of community life

“Being an on-call firefighter is a big commitment, but they are a vital part of community life and are highly respected. On-call firefighters will have other occupations, but when the call comes, they drop whatever they are doing and become part of a highly motivated team. This part-time role demands a great deal of enthusiasm, passion and determination – there is lots to learn and incidents can sometimes be challenging and traumatic – but there is a great deal of job satisfaction to be had in helping to save lives.

Working contracts are now becoming more flexible as it’s now recognised that having a diverse team creates a better working environment for everyone. Having a wealth of different skills and experiences helps with the many different incidents that firefighters are now being called to. Attending fires makes up a small proportion of the rescues now attended, so having crews of different shapes and sizes, genders and cultures really helps to serve the communities we protect.

Historically being a firefighter has been thought of as a job for men but with numbers slowly increasing, women are seeing that they too can realise their dreams. The role can be challenging but the job satisfaction is huge and once part of the fire family there are many opportunities for growth and development.

If you live within 5 minutes of an on-call fire station why not find out if they’re recruiting? Contracts vary but you may be just what they’re looking for to complete their team. There is always support from WFS – there are many on-call firefighters past and present who would be more than happy to chat about the role if it is something you are considering.”

From On-call to Crew Commander

Agata Wieczorek, Watch Commander at St Neots Fire Station, was runner up in the WFS ‘Women Firefighter Rising Star’ category’s Awards 2020. After moving to the UK from Poland, Agata joined Cambridgeshire Fire and Rescue Service as an on-call firefighter in 2012, aged 26. Agata became a wholetime firefighter in 2015 and undertook the IC1 course which would allow her to take charge of a fire appliance.

In 2019 she became a Wholetime Crew Commander. Agata attended several WFS training and development events to gain greater insight into the challenges and opportunities faced by women in the service.

We asked Agata some questions about her journey to becoming an on-call firefighter and how she’s progressed from there.

What made you decide to apply for the role of on-call?
“I was passing the station every day thinking what if? I didn’t have the courage to apply for a while, mainly because I’m a woman from another country. But one day I thought I’d give it a go. What’s the worst that can happen?

The courage to apply for on-call

Who inspired you to apply to be an on-call firefighter?
My dad. He was a volunteer firefighter in Poland. I guess he would have preferred to see me doing a more ‘traditional’ job for women, but I know he was super proud when I went down the path of becoming a firefighter.

What did you do before you became a firefighter?
I moved to the UK when I was 19, I was straight out of high school. Initially, I worked in the care sector, doing long hours at work while learning the language. I’d started a part-time university course, but had to decide between finishing my course or pursuing the role of an on-call firefighter. I chose on-call! I gave everything I had to be as good as I could be. After a few years, I successfully got into the wholetime service too.

Tell us a little about your on-call development and your progression?
I joined the Service on 22nd February 2012. After completing my probation I did my driving course, and then went on to become safe to ride. Shortly after, I was successful in applying to the wholetime service, and gradually worked towards promotion. I’m now a temporary Watch Commander at St Neots fire station in my wholetime role. This also transfers across to on-call. As part of my personal development, I’m taking part in a few learning and development sessions. This is to build my confidence and skills as a manager, but also as a leader.

How did it feel to be a runner up in our WFS awards?
I received many positive ‘well done’ messages since receiving the award. I hope I inspired lots of other women to start their own journey to becoming firefighters. As well as encouraging those in the role to have the confidence to progress their careers.

How has WFS helped you in your career?
Well, I’ve attended three WFS training and development events over the years. And wow, honestly after the event I felt I could move mountains! Each time it filled me in with positive energy and a courage to reach high! Those events were packed with many very inspirational women, just showing that we can get there as well. Currently, in Cambridgeshire, there aren’t many women in senior operational roles. And you need them to give you this boost of confidence in your own abilities.

You’ve done great work to address the lack of representation of women in the fire service. Can you tell us a bit about that?
I’m in the operational working group, and always encourage every woman to join the meetings if they can. Unfortunately due to current restrictions, it’s been a while since the last meeting, but hopefully, this will change. I’ve also reached out to neighbouring Service, Hertfordshire, to support future development sessions.

What advice would you give to women or girls thinking about becoming an on-call firefighter?
Do it! If this is something that interests you, just give it a go. It will be physically demanding, it will challenge your resilience, but it will be worth it! I love every minute of it.

Visit the NFCC’s on-call firefighters website to find out more about the on-call role and to register your interest.