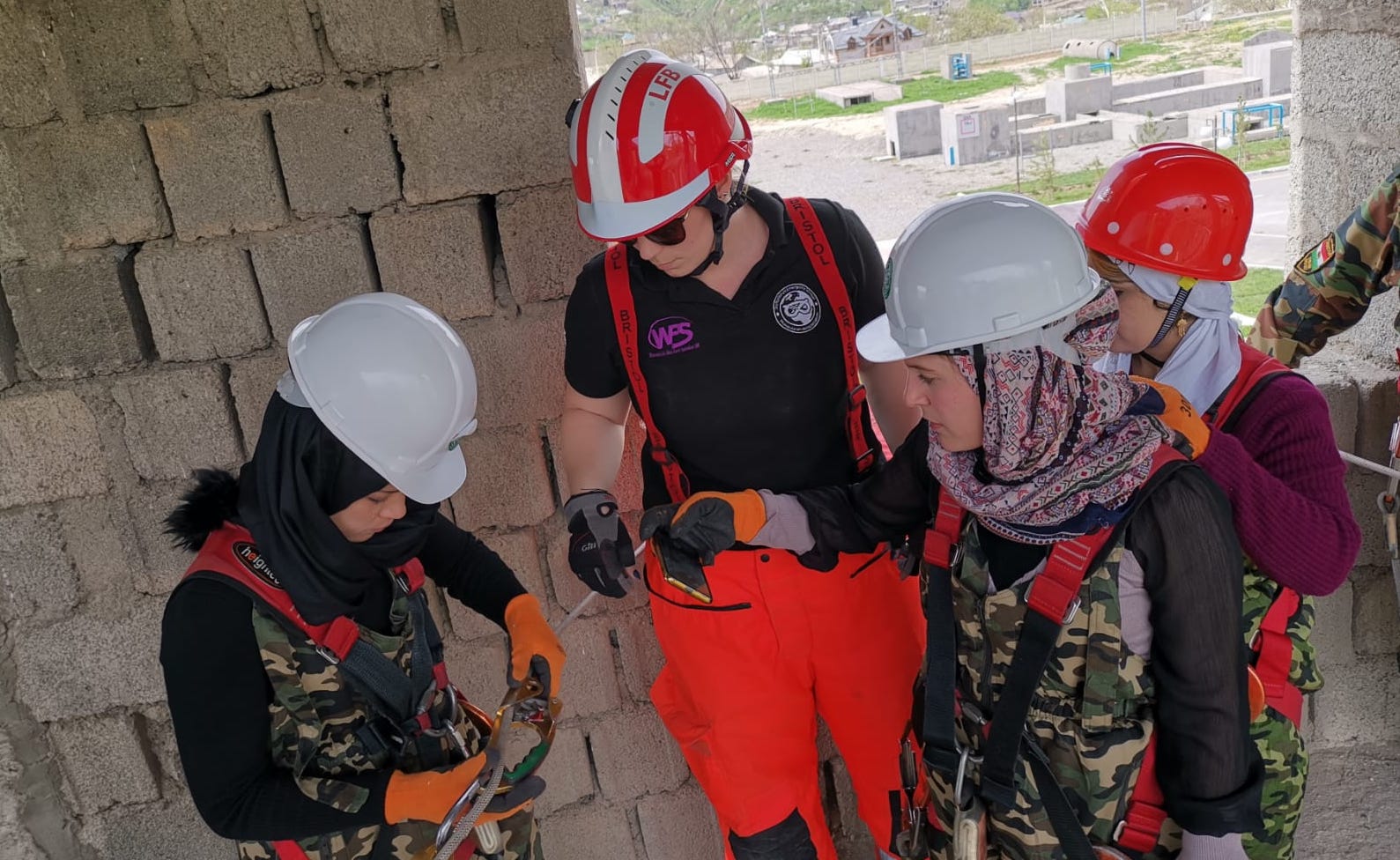 “In March 2019 the three of us headed out to Tajikistan with a team from Staffordshire Emergency Services Humanitarian Aid Association (SESHAA). Ron, Matt and Paul from SESHAA taught the male firefighters at the fire stations. And we taught the women in a purpose built building, designed for USAR Training. Imagine a very grand building covered in marble, yet with no running water or electricity which made things interesting!”

We had 16 students, all with varying knowledge. Nine women had travelled from Afghanistan and were already part of rescue teams. They had some basic knowledge of equipment but very little hands-on experience. We had three radio operatives, two women from a rescue team in the Khorog and two women from the station. Even though women in the fire service in Tajikistan wear the full uniform and are called ‘firefighters’ they actually work at the station house-keeping.

We were waiting for a shipment of donated equipment, but due to issues at numerous borders, it was delayed. We continued with two harnesses, one rescue harness, and GRIGRI’s (an assisted braking belay device) which we quickly had to learn about.

A fabulous translator called Khosiyat had the unenviable job of translating up to four different languages at a time. We started with the basics using a very practical teaching method and incredibly handy white board. We taught about equipment, knots and lines, anchor points, and safe systems of work before putting it into practice.

Then we covered all different types of rescue situations, such as rescuing off mountain edges, from RTC’s, buildings, floods etc. The women were super keen to learn, taking in every bit of information and were amazing helping each other.

By the end of the trip they could successfully carry out a snatch rescue. We were confident they could go back to their home-towns and rescue groups and pass on the information correctly.

We did experience a bit of a barrier, when the General didn’t believe we were operational firefighters. Despite us telling him about our experience and offering to show pictures, it came down to us to prove it.

We carried out a line rescue from their tower, and received a huge amount of respect afterwards. As a result, all the men came to shake our hands and thank us, taking hundreds of pictures! It was very surreal but felt like a huge turning point — showing how women are as skilled as men.

We felt so welcomed and respected in Tajikistan. It really felt like we made a difference, and it taught each of us a lot too.

A couple of us returned recently for the official project wrap-up and also trained some male firefighters, which was well received. During this time we taught ladder skills, use of cutting and spreading tools, rams, generators and hand pumps. And importantly, clearing up some confusion on the pumping appliance.

A traditional breakfast was put on for us and we had the opportunity to talk with one of the officers. We asked questions about their roles and found out that since our last visit there’s now a woman working as an operational firefighter! They have a way to go, but it’s good to know we’ve contributed to leading them in the right direction.”